The humble bandana; it’s been around for decades, but lately it’s seen a bit of a renaissance. Hermès produced a not-so-humble version, which meant I had to have one – obvi. Thick silk twill? You had me from the start. I’ve been toying how to style it for months, but bit the bullet and used it as a scarf tied at the front.

Since seeing Chiara Ferragni of ‘The Blonde Salad‘ sporting one at New York Fashion week, it cemented my view that it was a wise purchase. Slightly miffed I missed the fashion boat blogging about it so late, but it is what it is. There’s a lesson to be learnt there…

What are your thoughts about the kerchief? How would you wear one? 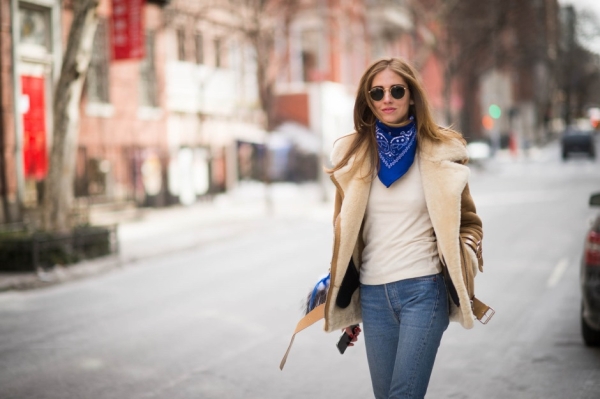 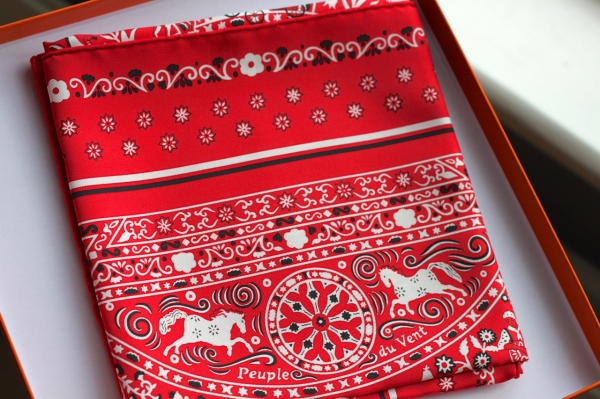 If you read my post ‘BE CAREFUL‘, then you’ll know that lately I have been practising the idea of positive affirmation. Well you will be pleased to know (unless you are either my parents or bank manager) that once again it has worked.

Ever since setting eyes on the Fendi monster collection, I was totally hooked. Instantly recognisable and devilishly cute, I knew I wanted a big fat piece of the pie. Proving to get my paws on said pieces proved slightly more difficult though. Cutting a long story short and with a whole lot of globe-trotting, I got my first bag bug – I couldn’t really pull off the women’s Peekaboo with conviction.

The next season meant I secured another one, although I did bypass the first menswear accessories. Buyer’s remorse, lesson learnt. After that came the next collection and I was thrilled to see a monster Peekaboo for men. FINALLY! Yet when I held one in store, it just didn’t sit right with me, I loved it, but already own so many big bags. I therefore decided to let it go, so someone else could give it a loving home. Or sell it on eBay, but whatevs.

When I first laid eyes on the monster backpacks, I knew I had to have one. Alas they sold out immediately, even Fendi couldn’t secure me one. I accepted defeat and got a cute-as-hell SS15 monster wallet from Colette. It certainly wasn’t settling, just a nice addition to my collection.

Since writing the post about creating one’s own reality I had been religiously telling myself I will get the backpack; envisioning myself with it – after all, I deserved one. Lo and behold, the opportunity to get one arose and in a colour I liked even more. Sure it may sound shallow and materialistic, but this is just an example. Happiness, love and serenity are also on my agenda FYI.

So I can now welcome a new addition to my Fendi monster family, a product of positive thinking. Long may it continue. 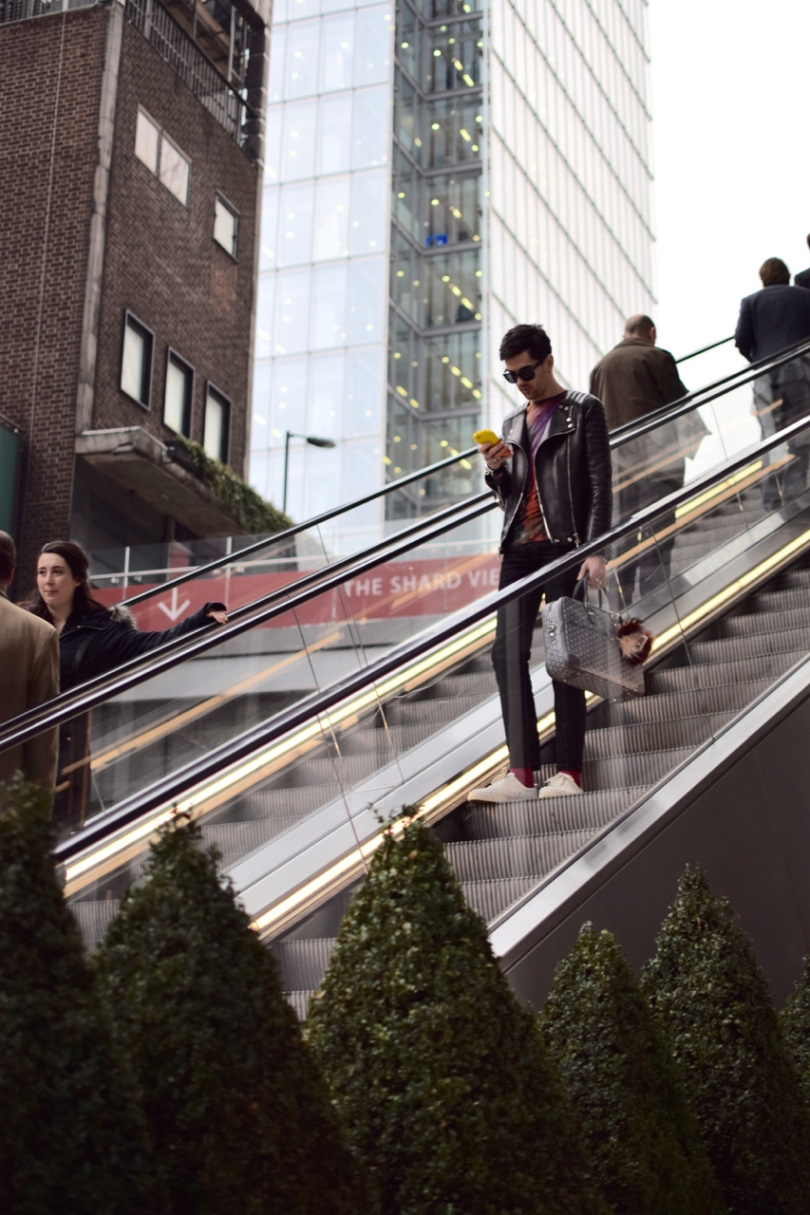 Ever feel like you’re being watched? The thing is, you probably are. Observing the idiosyncrasies of others can be fascinating at times and ‘people watching’ is a term I hear bandied around so much, it barely even registers now – it’s practically a national pastime.

But what does it feel like to be on the receiving end? Does it make you self-conscious? Does it give you gusto? For me, it all depends on how I’m feeling at the time. If I know I look good, there’s a spring it my step and conviction in my eye; but catch me on a bad day and it’s a different story altogether.

I’ll let you be the judge on how I was feeling in these photos (taken by my insanely amazing friend Priscilla). Did I even know they were being taken?

Positive affirmation, wishful thinking, call it what you will, but the idea that one creates their own reality has been around for yonks. It’s something that my mother always taught me and certainly her mother before that. The age-old idiom ‘be careful what you wish for’ has stuck around for a reason.

The 2006 best-seller, ‘The Secret’, by Rhonda Byrne brought home the proverbial bacon, but one could argue it was heavily influenced by the 1910 Wallace Wattles book, ‘The Science of Getting Rich’; which was based upon ancient philosophies (don’t also forget Brian Griffin’s ‘Wish It, Want It, Do It’). You see where I am going here?

A recent example in my own life springs to mind. I was moaning how I didn’t want lining paper on the walls for my new flat; being a perfectionist I desired a super-smooth finish. When it came to stripping of the delightful textured wallpaper that clung on with dear life, half the walls and ceilings also came off.  Cue complete re-rendering. I got what I wanted – but at a price.

Looking back retrospectively, I can recall countless examples of when I really, truly wanted something, it came my way. That’s not coming from a bratty point of view (at least some of the time), but the more I think about it, the more I am inclined to believe that there is wisdom in those old words.

Now there’s not to say there will always be a catch, sometimes things do just happen because we truly want them to. So today I will practise positivity. Do the next right thing, make the next right choice and stick by my principles.

Milan, home to some of the biggest names in fashion and undeniably slick street style. It’s also home to fashion journalist Simone Monguzzi, who’s been on my radar for quite some time now. His effortlessly cool looks always deliver – this man doesn’t just understand fashion, he lives and breathes it.

Simone kindly answered some questions for me, so kick back, relax, grab a coffee (or cigarette) and read on…

Make sure to check out his Instagram and Tumblr.

Florals? For Spring? Whilst Miranda Priestly may not approve, I certainly do. Admittedly it isn’t groundbreaking, but it was the basis of my outfit du jour.

The shirt itself was made by my tailor from a fabric I fell in love with; not too girly for a floral print and overall, quite subdued – winning in my book. Especially as I struggle finding long sleeve shirts to fit these gangly limbs.

Picking up on the green in the print, I wore a pair of dark olive trousers (also by my tailor) and a black Burberry Prorsum biker jacket. Whilst head to toe floral is a major look, I wasn’t really in the mood to channel my inner Hyacinth Bucket (or indeed Givenchy Resort 2014 if you’re in a serious mood) today.

I’d be interested to hear your thoughts on florals. Yes way, or way too gay? 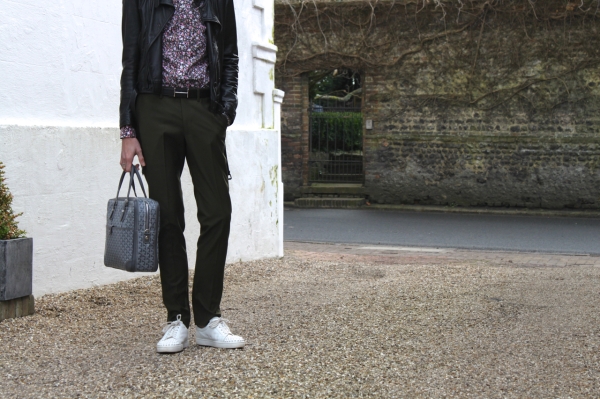 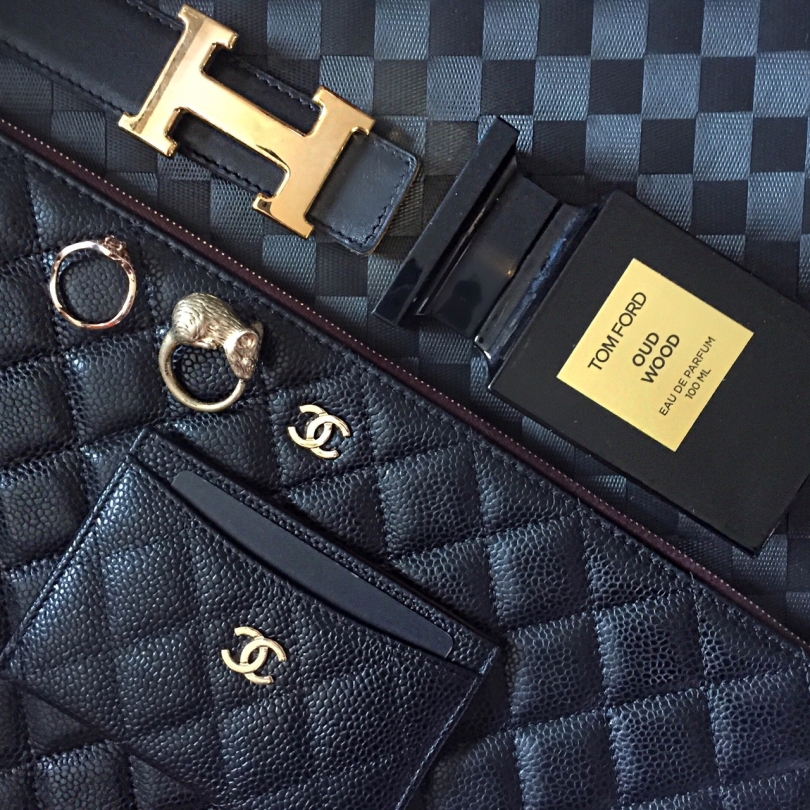 The flat lay. It’s a hard thing to master and it certainly took me a while (not to mention a lot of help from a good friend – you know who you are) to arrive where I am presently. Now I’m not saying I’ve nailed it by any means, but I have made progress.

If you search #flatlay on Instagram, it yields over 100,000 results, so it’s fair to say that the ‘lay is here to stay. Or maybe it’s just a case of flat cliché? Either way, I’m officially obsessed.

When attempting to compose your ideal image, it’s best to have a theme. In this instance mine was texture, with a black and gold palette. Composition and placement of the subject matter is crucial, so you may have to play around until you find what works for both you and the image. If you are capturing it with your iPhone, the square camera setting on iOS is godsend; but when using a DSLR, bear in mind that the image will have to be cropped when uploading it to Instagram.

Backgrounds and lighting are also key factors. Even the most amazing things can look awful on a hideous base; yet the most mundane objects can be transformed with a beautiful backdrop. Ultimately it’s a matter of taste, find what you like and do your best to make it work. Natural light is preferable, unless of course you’re a pro; and remember that shadows can actually work in your favour.

So what are your thoughts on the flat lay? You can check my Instagram to see my attempts. From food to fashion, it is what you make it. And yes, some attempts may be less flat yay and more crap lay, but progress not perfection… 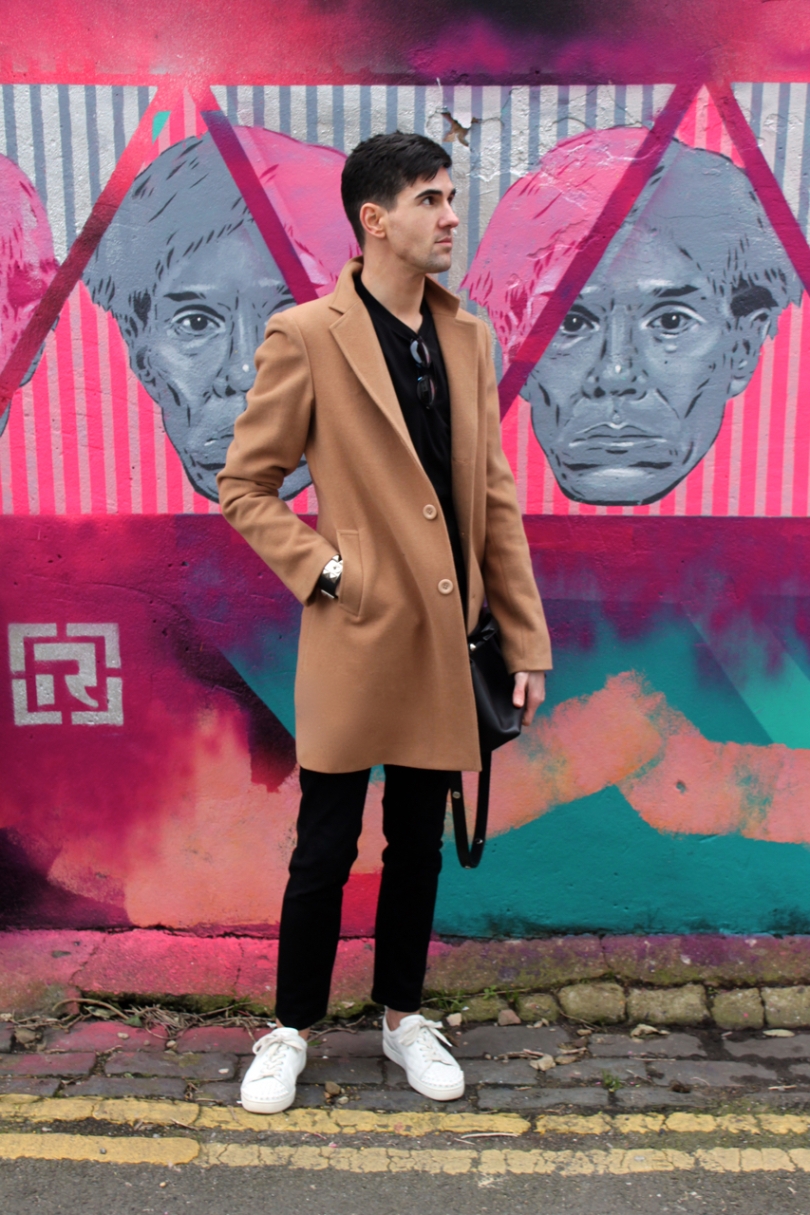 I had intended to post this yesterday, so technically this can’t be classed as a ‘WIWT’ (What I Wore Today) post, but ‘WIWY’ doesn’t quite have the same ring to it. Que sera sera.

To set the scene, Shaughn and I spent the day in Brighton looking at interior furnishings for my flat. Sounds fun, but finding the perfect pendant light is a tricky task when you’re a hideous perfectionist. Whilst wandering through the North Laine I found a spot perfect for an impromptu shoot. I’m all kinds of crazy for punchy graffiti and this neon number did the trick nicely.

Outfit wise, I wanted to keep it quite simple. Black and camel is my current colour combo crush, so I chose a Givenchy t-shirt, Fendi jeans and cashmere coat – total godsend when the sun disappeared and the chills came a creeping. For the accessories I chose white Christian Louboutin ‘Louis Junior Spikes’ trainers, an Hermès cuff, Dior ‘So Real’ sunglasses and my Fendi ‘By The Way’ bag.

What are your thoughts on this look? 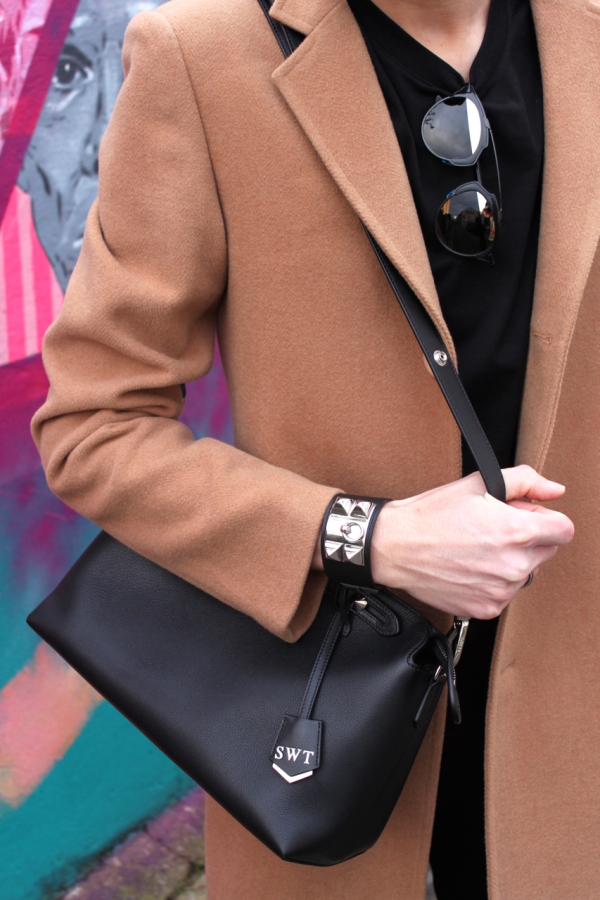 I was tagged by Michael Biro of globalgarcon.com to spin a yarn on one of my pairs of shoes. A shoe story if you will.

Let me take you back in time to the nineties, when Tom Ford was appointed as Creative Director at Gucci. Selling sex was on the agenda and with help from super-stylist Carine Roitfeld and photographer extraordinaire Mario Testino, Ford created the infamous hyper-sexualised ads that showcased his designs perfectly. Clearly his creative genius was not only recognised, but applauded, with sales increasing by 90% between 1995-1996 alone. Gucci was back.

So after weeks of nagging and whining, I dragged my mother to Bond Street to sip in their serpentine splendour; ’twas not meant to be however, said shoes were sadly sold out. My dreams dissipated . Or had they?

A short while later, resigned to the fact I would never get my hands on, or indeed feet in, my beloved shoes, I was walking past a charity shop when something caught my eye. Sitting patiently in the window were the python loafers, almost glowing in the fluorescent light. Surely not I thought, but then again, this was Dorking. So in I ran and out I skipped with one pair of never-worn Gucci loafers. Maybe it was meant to be after all.

Time and styles may pass, but I know that I shall never part with these shoes. Tom Ford nineties era Gucci will always hold a special place in my heart; it shaped my style and is a part of my fashion story.

Do you have your own tale to tell? A special shoe that speaks to you? I’d love to hear it. 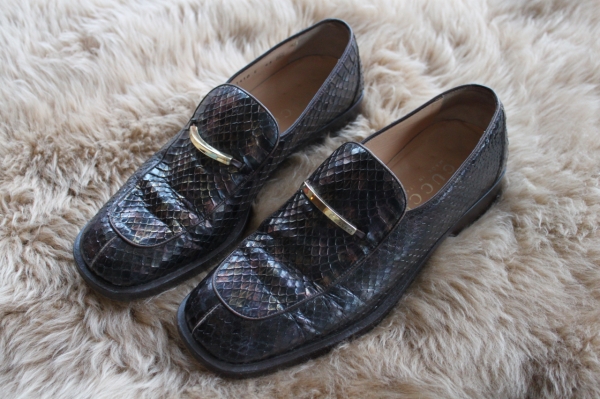